Show off your ISML-related talents, whatever they may be. You can also request character avatar changes here.
Post Reply
25 posts

Not sure if this is the right place to make this post........
ISML 2009 Double Elimination - Championship Match - AMV, created by myself. Sorry about the quality, this is my 1st AMV and I kinda rushing it a bit. I got the idea today at lunch time AEST 1:00pm and by the time I got all the clips I needed is AEST 5:00pm then I spent 3hrs putting it together. Well, hope you'll like it. Please make some suggestions, comments, complaints anything that can help me improve next time.

Yeah, it's pretty good, although I think the battle scene with Hina versus the dark butler is inappropriate as the ISML movies should always have scenes of the candidates by theirselves, as well as the scene with Shana and the subs. Maybe you can replace the subbed part with the a scene that's raw, and the battle scene with Hina with a scene focussing solely on Hina by herself (preferably a cute one XD). Given that you made it within 3 hours, I'd say it suffices. Thanks for da vid~
Top

Thanks man, I would like to but problem is the lack of resourses I got.......... well..... maybe next time. I can't really do much with the shana 1 because everything is rmvb for some strange reasons. I have to use Shana S. Again, I had the idea of making an amv like 9hrs ago then by the time everything planned out its like almost 6pm :{ Will do a quick edit, version 2 should be up in an hour, thanks for the comments.

Awesome video.
A miracle that you believe in when you know it won't happen......... is hope.
Top

Version 2 is now released, give it a few mins to process the upload. Enjoy

Hmm not a bad video indeed ^^ - though I might have dropped in some of the tower fight with Hayate bit or at least the sword swipe etc for Hina .. not sure why just feel it would be nice haha.
Top

[ Topic moved with a redirect left in the DE forum. ]

I missed viewing V1, but based on the comments, I will agree that V2 is a much better production. ^_^

For work on short notice, this is really great, and I enjoyed the pacing. I believe we can get this linked on the main page; more on that later.

You requested critiques, so my comments:

Do update me if a V3 is finished!

Again, this is great work! 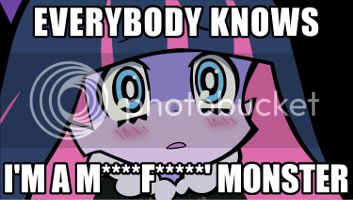 Crisu wrote:[ Topic moved with a redirect left in the DE forum. ]

I missed viewing V1, but based on the comments, I will agree that V2 is a much better production. ^_^

For work on short notice, this is really great, and I enjoyed the pacing. I believe we can get this linked on the main page; more on that later.

You requested critiques, so my comments:

Do update me if a V3 is finished!

Again, this is great work!

I have 1.5hrs before everything starts. I'll give it a shot see what will happen, from V1 - V2 took me about an hr, not sure how this will turn out. For V1 you can check out my channel, it's still there.

BRB I'll be updating this soon.

Definately an improvement from V1, but I have to agree with Crisu bout Hina having less screen time than Shana. Pop in one more scene of her and it'll be awesome (not that it isn't awesome already), because at the end of the video, the music is cut short. Should just let it run for a few more seconds (the Hina scene).
Top

Updates
Clips - Both Hina and Shana have around the same time, 28 and 29secs timed - Now rendering.
Images - Improved some images
Music - fading out time had been increased

You're on the front page now.

If it changes again, I'll be happy to update the video with a V4. If there's going to be a rematch on Thursday, that video will be there for a few days.

Actually, this is not really that bad at all, factoring in how much time you were given to make something like this. Of course, I could make some of my usual criticisms and such (many staff members will tell you that I'm a very harsh critic), but this is especially extraordinarily done, and I don't think you could have done better within less than 48 or so hours unless you were some kind of superfreak. Good job.

Great video. Portrays the atmosphere of a championship match prettty well, and has a tinge of epicness feel to it.

Great video ARTA8SIMS! Let's hope the match is as epic as your video.

Yay! Thank you ARTA8SIMS. I loved the video and the music

Just wnat to ask what program do you guys use for AMV..... Movie maker + Photoshop don't think is a good combo.