Yoshino vs. Takanashi Rikka means at least one of the top three Nova girls is going to have her winning streak stopped.

Finally. An exhibition with a character I'm very familiar with and love- oh my god.

(The longest ever! Feel free to blame maglor, as always.)

RPI and RPI-3 update after Amethyst 6: 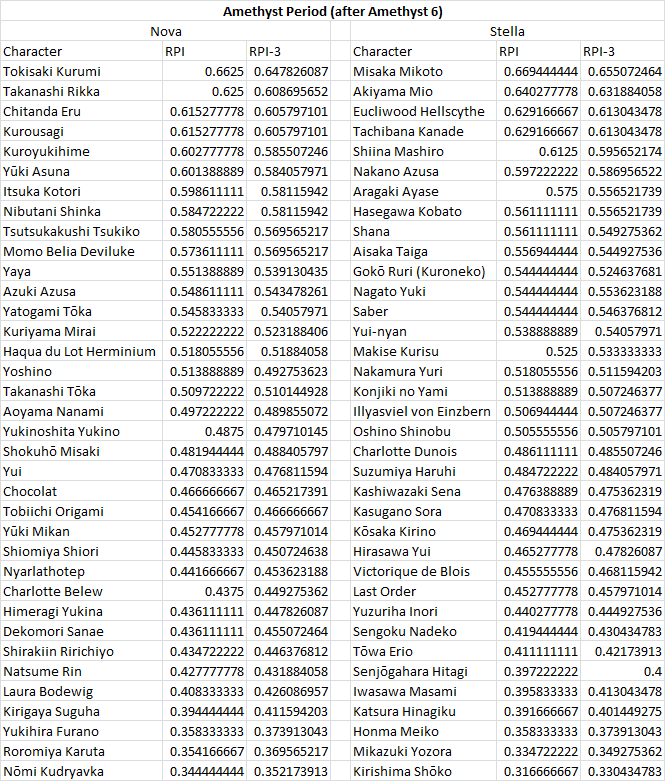 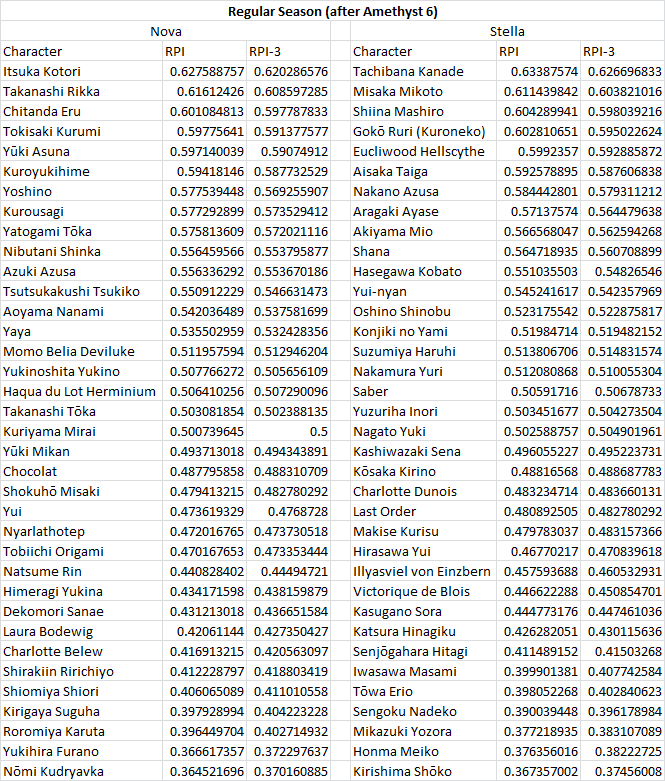 No changes in leadership.

Result of Prediction test for Amethyst 6 - originally I used wrong predictions for SWVO-add and VP-add. In this result the predictions were corrected! (see also viewtopic.php?f=17&t=4841&start=200#p253878" onclick="window.open(this.href);return false; for Amethyst 5) 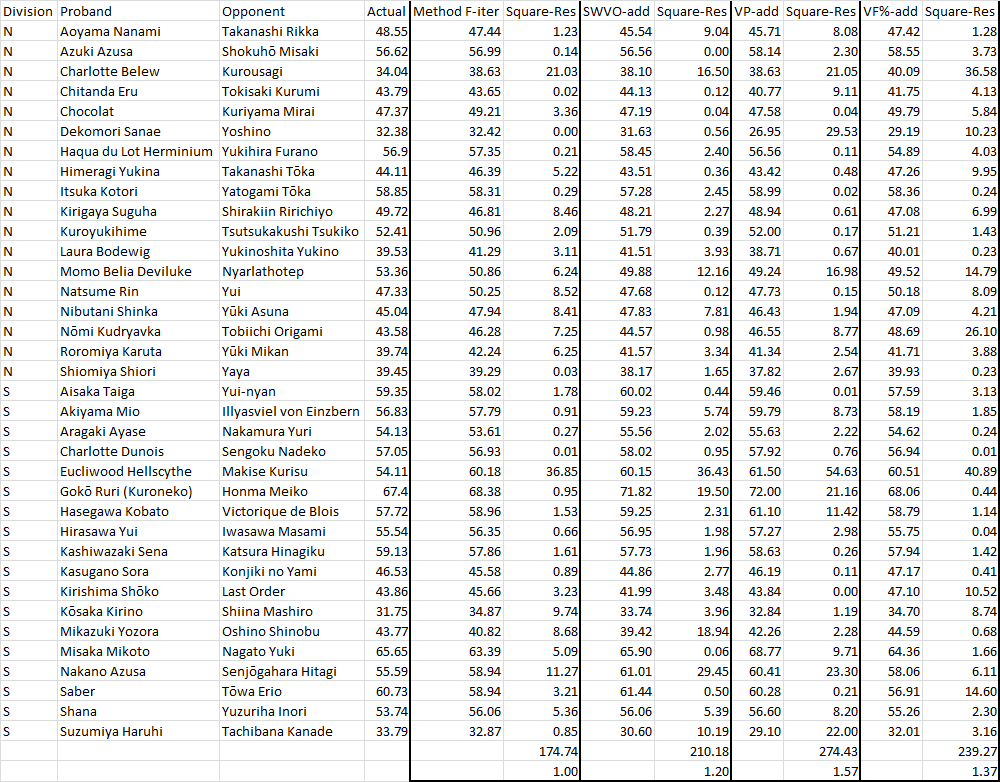 All methods pass the test.

Predictions for Amethyst 7
Another Large ImageShow 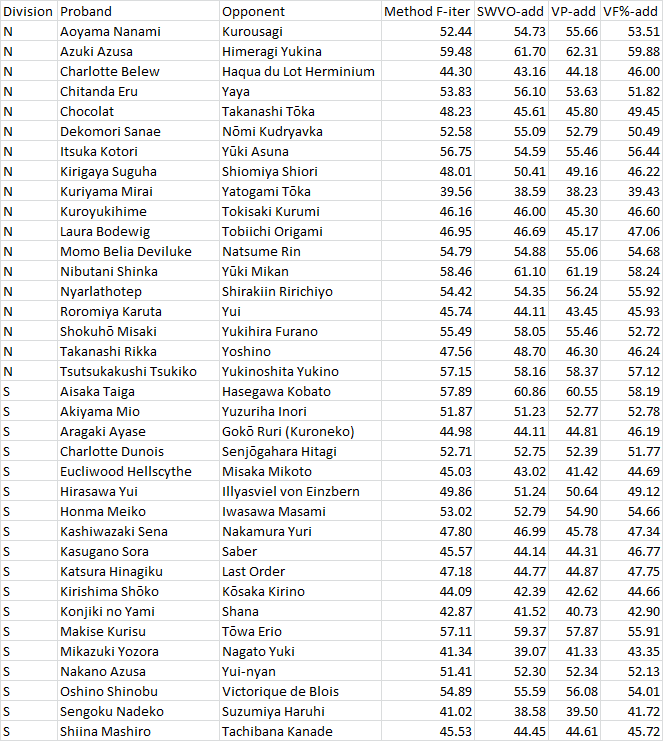 Amethyst Round 7 Predictions (Its already round 7? I thought we had one more round!)

No changes in leadership.

Apparently, even the RPI is severely affected by Loops. Since Loops are unavoidable, I was hoping we can find a strength measure that is less affected by loops compared to SDO, and sadly, it seems RPI can't do that.
-----------------------

By now, I think we can safely conclude that Loops are having much greater impact on SDO compared to any SDO manipulation attempts. I guess we need to find a way to minimize the loops while keeping some randomness in the schedule.

akumaxx wrote:If we have to make a "cute critter" tournament, then maybe we don't have much entries.

maglor wrote: Shmion, Can you also do SWVO - multiplicative in Amethyst 7? I want to know whether its predictive power stayed the same, got worse, or improved compared to Amethyst 1.

maglor wrote:By now, I think we can safely conclude that Loops are having much greater impact on SDO compared to any SDO manipulation attempts. I guess we need to find a way to minimize the loops while keeping some randomness in the schedule.

Either this or we use a loop independent value.

maglor wrote: Shmion, Can you also do SWVO - multiplicative in Amethyst 7? I want to know whether its predictive power stayed the same, got worse, or improved compared to Amethyst 1.

maglor wrote:By now, I think we can safely conclude that Loops are having much greater impact on SDO compared to any SDO manipulation attempts. I guess we need to find a way to minimize the loops while keeping some randomness in the schedule.

Either this or we use a loop independent value.

Any value that is dependent on the opponents will be affected by loops. At the end of the season, I guess all the stat team needs to gather for a big discussion.

I hate Misaka v Eu. All data indicates a Mikoto victory this time. But like with Mikoto v Kanade, you can never be too sure.

General predictions about 1st-tier matches in Stella: Kanade, Ruri and Mikoto would win, with some margin to spare.

Parties who might interfere with this match:
a. Nova powers (depending on who, Eu or Mashiro, they think is a bigger threat than help in Necklace Match)
b. HanaKana faction
c. Mashiro

Reasons to interfere in favour of Eu:
a. Prevent Mashiro from entering the necklace match who might pull votes away from Nova, or hope that Eu entering the match would draw some votes away from Kanade and Ruri
b. Strengthen the supposed 'bond' between Eu and HanaKana faction
c. Beat Mikoto and spoil her morale in the run for the Tiara

(1)
It is the expected result. There would be one less competitive character from Stella in the Necklace match, and Kanade would probably run away with an SDO advantage. Her only competition would come from Nova.
As for the Tiara picture, Eu is probably out of the race unless she gets a serious strength boost in the 2nd half of the season. It also raises question whether the supposed 'alliance' of Eu with Kanade and Ruri is still intact. It would also seem that the real forces remaining in Stella would be Mikoto and Mashiro, or maybe if people'd rather Kanade win it again.

(2)
Because Mikoto is expected to win by a considerable margin, I'll include the case that Eu loses by a small VD here, in addition to her winning.
That means people prefer having Eu in the Necklace Match instead of Mashiro. How this would impact other characters is a huge question mark. On the one hand Eu is the only one with competitive SDO from Stella other than Kanade, but on the other hand there might be overlap in supporters with Kanade. How putting Eu in there affects Kanade's VF would be interesting.
As for the Tiara picture, it means that Mikoto has still not swung herself free from the fate of losing every time she faces Eu. It also means she is much less likely to win against Ruri and Kanade. On the other hand, it injects life back into Eu, making her a decent competitor for the Tiara again.

One more comment: Mashiro needs to prove her power by not losing too much to Kanade.

@maglor
It won't affect Amethyst necklace picture. It's impossible for Eu to win vs Kanade and Mikoto can't participate anymore thanks to winning Aquamarine. There are several characters who can win Amethyst (Kanade is obviously the favorite) but Eu isn't one of them.

For the latter part:
(2) It would mean Eu is still very strong and part of Stella top4. She would be the favorite to win the Tiara in such case depending on the schedule. If she manages to avoid Kanade (Mikoto is always capable of gathering huge numbers vs her, that's a possible semifinal match), she should win the Tiara. If she were to meet Tenshi in the final (where champion curse is the most powerful), she would still have a good chance thanks to not getting the trophy before. Especially if she were to fight vs Mikoto in semis, such win would give her fans a lot of confidence, possibly enough to overtake Kanade. I think we can disregard Nova here.
(1) That would make things very interesting. It would mean that last one to get the Tiara of Stella's top4 isn't too strong (remember Eu is talented at dealing with tsundere so loss to Mikoto would be of huge importance). She would be in the range of Mashiro AND Nova's top then (Kurumi, Kotori, Rikka). Kanade and Mikoto (unquestionable top2) already have the Tiara so they're likely to attract antivoting in post-season, lowering their strength to ~the level of others. 7 contenders. I don't think there was a season like that before.
Kuroneko isn't strong enough to overcome champion curse but she can definitely smack Nova in quarter/semis.


One more comment: I hope Kanade can beat Mashiro by a lot so people would finally stop believing she has any chance of going against the top of Stella.
Top

Tiara Boss - Kanade. She is the assumed winner of the Tiara. You must prove rivalry against her to hope at getting the Tiara.
Gatekeepers - Mikoto and Kuroneko. Successfully beat these two and you may get the support to challenge the Boss.
The Enigma - Eucliwood. She is strong but weird. She beats Mikoto, yet is crushed by Kuroneko and Kanade, and lost to even Tiaga last year. Nobody really knows whats up with her.

Eu's victory her means nothing because she has already proven she can beat Mikoto, consistently. But she consistently fails miserably against Kanade and Kuroneko has grown much in strength since 2011. She must somehow make it close to Diadem and/or beat Kuroneko to try and get the Tiara.

1) If Mikoto wins, she is trying to get the Tiara again and her fans are sticking around for once. The real test, of course, will be either Kuroneko and Kanade. She must beat Kuroneko or almost beat/beat Kanade AND secure the Diadem to really solidify her case. Euclidwood's lost here eliminates her chances at the Tiara.

2) If Eucliwood wins, she hasn't done anything out of the ordinary. She consistently beats Mikoto. She got crushed by Kanade last period, so its unlikely that Kanade's voters have decided to give Eu a chance at the Tiara by supporting her. For Eucliwood to prove she wants the Tiara, she must win a necklace over Kuroneko -- preferably by overcoming a SDO disadvantage or by beating Kuroneko in the Round 7 of the period (likely Ruby). If she wins one after Kuroneko, without Kuroneko in the necklace round, or with Kuroneko having a large SDO disadvantage, she misses her chance at proving her worth.

The last hope for a Stella non-repeat is down! All forces, redirect your efforts to supporting Date-A-Live. Focus your efforts on building up the Kurumi!

Well what'd ya know? Look at Kurumi and Kanade, the Nova and Stella with the highest SDO.
Coincidence? Or really attempts to boost SDO?