Welcome to ISML Wooden Casino, where you go big or go home! (not really)
<Insert a good illustration here>

There is one additional rule this time which is bold below. The rest is the same as how you played last period.
Also regarding the prize for last period, read the spoiler box. Rules: Formula: [(x-y)/z]*a (round up)
ExampleShow
In round 1, the top 3 smallest VD for winning characters are: Tomoya (1 VD), Aoba (89 VD), Subaru (89VD) (Since there's a tie at 2nd smallest VD, both of them are counted as 2nd and there's no 3rd this round)

Suppose total wrong bets that round was 200 and the only 2 person with winning chips are:
Kiwi bet: Emilia 20 Subaru 30
Woody bet: Tomoya 10 Aoba 40

Result:
Kiwi: [(200-20)/80]* (30*1.2)= 81. After extracting 20 chips on Emilia, she won 61 chips that round.
Woody: [(200-0)/80]* (10*1.5 + 40*1.2)= 158. He won 158 chips that round (#woodyhaxbanwoody)
Notes: Prize: Each period will has one winner. The prize itself is widely opened for discussion, but these are the options I'm considering atm:
Last PeriodShow
I was very reluctant to start this before the rewards are given out (That's why it wasn't a thing until round 3). But in the end we will have to wait until Maglor final decision on proper amount of melonpan, so there's not much I can do. The top 3 are guaranteed a certain amount of melonpan however.
As for Reverend, since he refused to be more serious about the prize (or at least requesting something I can do), I will go with the basic, which is...
Sapphire's First place prizeShow
A banner! Yay! 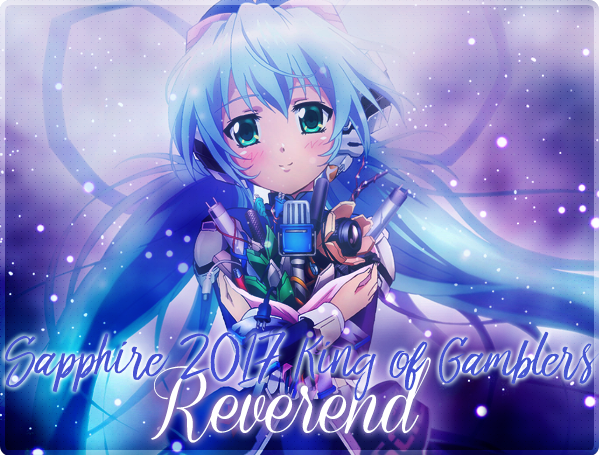 If you have questions, don't hesitate! Ask away~
Now that you've reached here, you're officially a professional gambler. Don't hold back! Gamble to your heart content, I challenge you!

The current round of casino - Round 5 Emerald - has started. Place your bet on those you think will win with the tiniest margin!
Last edited by WoodyMC on Sat Sep 23, 2017 6:57 pm, edited 2 times in total.

Emerald, huh?
Hmm who would look good in green, huh?
Maybe I should try to get Forte a banner?

Man, it's like China ISML voters are trying their best to get everyone betting a negative score lol

20 chips
This first. May change again later.
Giving his love for life, and died dreaming about her in the end. A real happy man, right? ~
Top