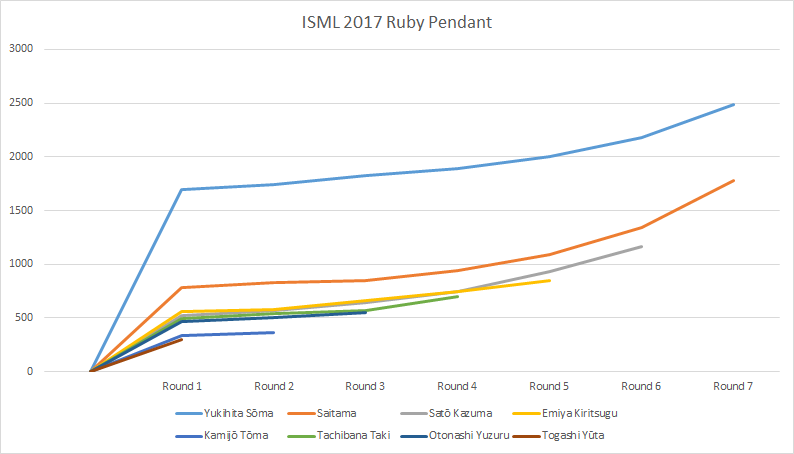 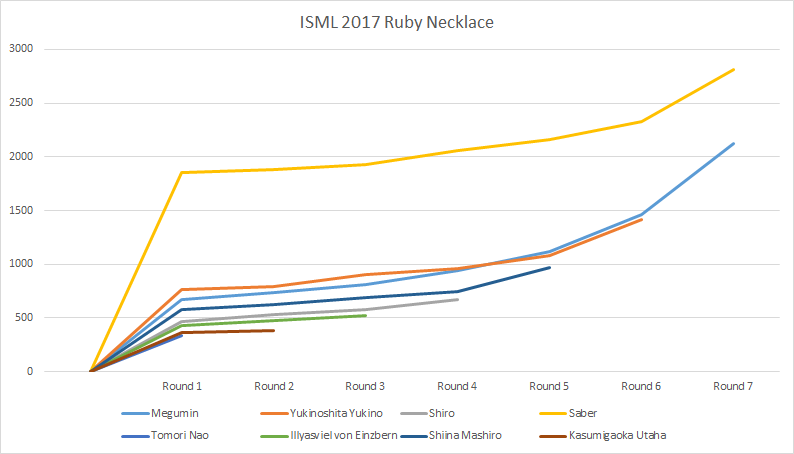 You guys did a good job on the filtering of those ballots. And one thing, are the any biases against Chris?
Kono Hoshi o Nameru na yo!

After Rin won the Sapphire Necklace in two period before at this year of ISML, now another main characters, Saber, won once again like the year before, but with Ruby Necklace.
And also congrats to Souma for Ruby Pendant. And this is the surprised moment on ISML, after Levi "broke his rule" for won got Emerald Pendant.

By Jo-Ryan Salazar
The Bedlam On Baltic Avenue
October 26, 2017

Match Day 7 of the 2017 International Saimoe League is a done deal and in one of the biggest upsets of the season, Saber, listed as a 50-1 longshot by the Bedlam on Baltic Avenue, defeated Megumin 2815-2122 to defend her Ruby Necklace. Yukino Yukinoshita was third with 1417 votes. Rounding out the order were Mashiro Shiina (971 votes), the favored Shiro (674 votes), Illyasviel von Einzbern (519 votes)_, Utaha Kasumigaopka (382 votes) and Nao Tomori (335) who has made a habit of finishing last in Necklace rounds and is already tipped to do so in the Upcoming Diamond period, given that she qualifies, which is certainly likely.

Muh best choices for Ruby in both necklace and pendant got 2nd, so i guess that's not a good result for me. At least it's Saber and Souma fits Ruby.

I know i shouldn't have expected much but ... NANACHI

If Karen or Horikita ends up winning seasonal however, I'll stew a rabbit alive

I LIVE! I LIVE! ISML IS SAVED

Megumin actually did well this necklace round. Hopefully, she can win Diamond. I did a check, and Megumin and Rin are the only 2 females who have not yet lost a single match (excluding necklace matches).

Meeeeh. Of course after Rin, Saber would win. Disappointing result.

Yukihira is cool, but Saitama still didn't get any necklace. Just like Mashiro. Or Megumin. Both have been in every Necklace Match this year. They both deserved it more than Saber after their results this year, but okay... Still Diamond.

MIA = Made in Abyss

One look at those graphs and you can already tell how phony these results are.

Congratz to Saber for winning a necklace!
She deserves more love in ISML.

Gara must be thrilled :3