How I play:
*waiting for others to get done rolling so I can roll for my characters*
*sees someone else's character*
*claims them*
*spends all my own rolls looking for Isaac* 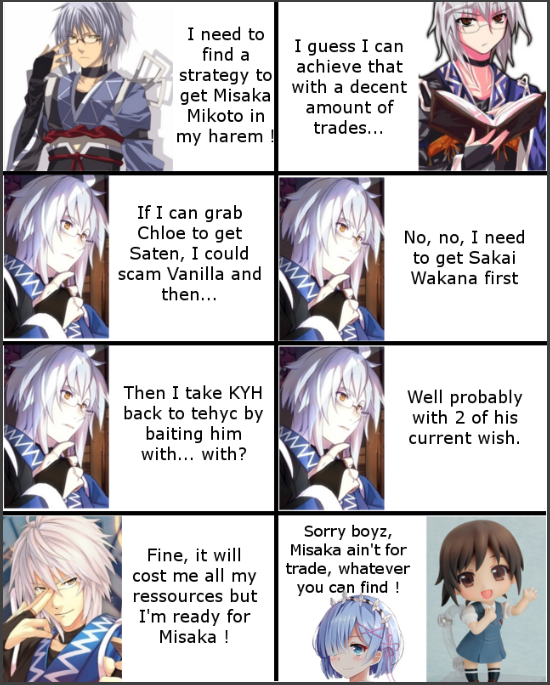 ISAAC IS FOUND MEME IS DEAD BLESS THIS DAY

We've got some exciting news for the future of Waifu Wars on Discord, so pay attention!

FIRST: Forced Divorce is shelved for now. I wasn't satisfied with any of the implementations I had designed, so we'll put it on hold. I do think forced divorce is important and necessary in some way, so that players aren't immediately locked out of fighting for their favorite girls, especially if they joined after the girl has been claimed.

Onto the main news!

Waifu Wars will be closed and opened monthly

Starting November 15, 2018, the #waifu-wars channel will be CLOSED and LOCKED until December 15, 2018. It will be opened for 2 weeks before being CLOSED again for another month.

We're introducing seasonal cycles to waifu wars so that you aren't pressured to stay online all the time, and can live a normal life sometimes. Additionally, this will allow Mudae updates to accrue so that when you do return, the waifu wars will be much more exciting than before. #bots will still be open for Pokemon rolling and Tea games. We'll try out the monthly cycles, and adjust the timeframes as necessary.

Every time waifu wars reopens, there will be a target MALE and FEMALE character in the pool that will be the designated capture target for the month. Whoever claims the character(s) can redeem the claim for rewards in the form of Forum Currencies and other perks. This will keep the veterans having fun as well!

This forces players to be selective of who to keep, instead of just claiming a random character every 3 hours, and keeps the pool open for newer players to hop in without feeling too behind. Note that you can claim into the 5th page, as long as you resolve the extra character quickly. If I discover an extra page on anybody, I'll work with them to get rid of a character so they can get back down to 4 pages.

This is in tandem with a new feature we're adding, so don't freak out quite yet!

What do you do with your extra characters? Well, you can donate the characters to the Wish Bot! Wish Bot will be my personal ALT account that will hold characters for other people. Let's say that you see a wishlist of someone else's fly by, but you're full on character pages. Just grab her and donate or trade with the Wish Bot! Trading with the Wish Bot gives you access to a number of other characters that people want - so they're all valuable goods! If you donate to the Wish Bot, you will unlock perks that may include things like extra pages, forum currency, and more! Details will come as the Wish Bot gets implemented.

We're planning on implementing the Page Limits and Wish Bot on November 11, 2018. Please be ready to divorce/give away characters by that date and be under 60 characters in your harem!

The #waifu-wars channel will be closed for the monthly cycle on November 15, 2018. Please look forward to playing again in December!

UPDATE on the Discord server:

If you guys haven't noticed, a lot of forum activities and active discussion is happening on the Discord server. The forum is still being used and a great place to organize information, but if you feel like the discussions here aren't as active then please come over to the Discord server!

We've also hosted many fun events on the Discord server, including karaoke nights and hangouts. Other events like the past Mahjong tournaments and the on-going ISML Forumoe is held between the forum and the Discord server as well. If you want to host an event or have a fun activity in mind, please share with us and we can help you with organizing it!