Discuss any anime in general, ISML or not. Please be mindful of spoilers and use spoiler tags!
Post Reply
244 posts

Non-otaku stuff quiz(zes):
Toady's ISML Forum quiz
smartboyhw's ISML PV quiz
TriviaShow
The origin of the term "waifu" is attributed to episode 15 of Azumanga Daiou where Kimura responds to a question (about a woman in a photograph) with the English phrase "my wife." The anime was released in the United States in September 2005, and shortly afterward "my/mai waifu" entered the English-speaking fans' vernacular. Coincidentally around the same time, the Japanese equivalent to "my waifu," 俺の嫁 (ore no yome), entered into popular usage among Japanese fans.

The abstract "SHAFT" style of animation and direction, which Shinbou Akiyuki is so well known for ever since his work on the 2004 Tsukiyomi anime, was not pioneered by Shinbou. A similar style was seen seven years prior to Tsukiyomi, in J.C. Staff's highly acclaimed Shoujo Kakumei Utena directed by Ikuhara Kunihiko. But even Ikuhara wasn't the first to utilize this style; he himself was influenced by the works of the earlier director Dezaki Osamu. The musical unit fripSide works under VisualArt's, having partnered with the company since 2006.

Vocal unit Kalafina was founded by composer Kajiura Yuki, initially for the sole purpose of singing the Kara no Kyoukai theme songs. The "Most Votes" category of the Seiyuu Awards was introduced in the 6th iteration and was won by Kamiya Hiroshi. After winning the award 5 years in a row, Kamiya was placed in the hall of fame, making him ineligible for the award in subsequent years.

The notion that Lolita fashion gets its name from Nabokov's novel of the same name is often rejected by the Lolita community. They instead claim it was a word created by the fashion company Pretty (later renamed Angelic Pretty) to describe the style of clothing they specialize in.

The "Manabi Line" is a popular but highly inaccurate measure for the success of an anime production. The term gets its name from the anime Gakuen Utopia Manabi Straight, which was reported to have broken even. Manabi Straight initially sold 2899 discs in its Volume 1 release, and thus 2899 is the often-quoted value for the "Manabi Line," the point at which an anime becomes profitable. Other values for the "Manabi Line" are 3394 (In the second week, Volume 1 increased to this number of sales), and 2435 (the average sales per volume of Manabi Straight). The usage of "kamidere" to describe a certain personality may have originated from the anime Kyouran Kazoku Nikki, wherein Kyouka uses the term to describe herself (in episode 23).

The popular trope in Mecha anime wherein a mech or battleship fires a barrage of random-trajectory missiles is known as the "Itano Circus" and was pioneered by Itano Ichirou.

Despite having passed away in 2011, seiyuu Kawakami Tomoko retained the role of Athena Glory in the 2015 OVA Aria the Avvenire.

Osamu Tezuka is called the "God of Manga." Some people also honor him as the "Godfather of Anime."

Only 5 anime series have ever broken 100,000 sales on thier Volume 1 release. Two of these are The World of Golden Eggs season 1 and season 2. However, these two are often disregarded by fans because of their significantly cheaper pricing compared to other anime. The other three series are the 1995 Shinseiki Evangelion, the 2014 Love Live! season 2, and the 2015 Osomatsu-san.

In almost every VisualArt's/Key-related production in which Maeda Jun is a scenario writer, there is a character, or a reference to a character, named "Saitou." The only exception is Air. Maeda was not a scenario writer for Planetarian or Rewrite.
Last edited by RailWarrior on Sat Mar 12, 2016 10:07 pm, edited 64 times in total.

Match the following anime to their respective genre:
E) Shit

Quiz 2: 11/23
SpoilerShow
Sorry, I don't give a shit to Seiyuu I don't really care about. Including her. (I enjoyed the characters she voiced themselves, and there's no doubt she's a great voice actor. But I'm not that into her.)
Other than that, every anime I failed to answer are all anime I haven't watch and just filled the question so that I can go "next question."
(except Q4 because I haven't watch it but already knows about it, and Q13, because I watched the english dub, I only watch the first "original" dub of everything, whether it is anime or movie or any other drama shits. It's the standard I keep to myself.)
Quiz 3: I'll take this later.

Toady Idol Anime Quiz: 9/14
SpoilerShow
Argh I was sure I already checked Eri

though I get some luck in Q2 and Q5

HAHAHAHA even I got 31/51. Somehow. Having watched pretty much 0 of those shows.

34/51.
No idea about Sawashiro, but you still get half the points if you're not too unlucky >_> 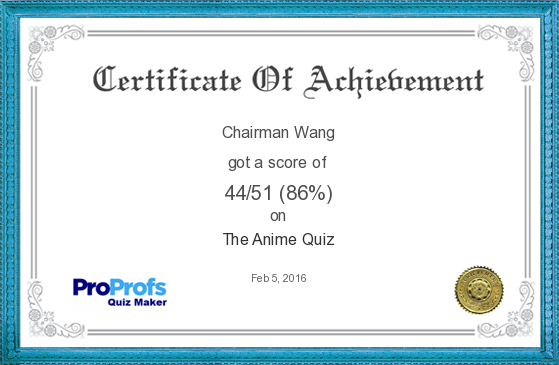 41/51, but technically just 35/51 for me ~.~ (Oh well~~~) Maybe you can make some new quiz and post it here again.
Actually you can make one quiz per week until the start of ISML, so people will have some fun in the forum at least. Is okay if not.

Was about to choose Angel Beats 1st Beat and then ... wait, what does 1st Beat about? Is that just the VN version of the anime? WTF, is this trick question ? *untick*
*see result* ...
Well, this quiz is shiz anyway~

tehyc wrote:Actually you can make one quiz per week until the start of ISML, so people will have some fun in the forum at least. Is okay if not.

I wasn't quite planning that...but I did make the first quiz bout a week ago (Feb 1), and I now have the second one ready

I guess scoring for the matching and check box questions were unfair. Quiz 2 has none of those (except for 1 matching question, with decreased possible points). Should be easier! 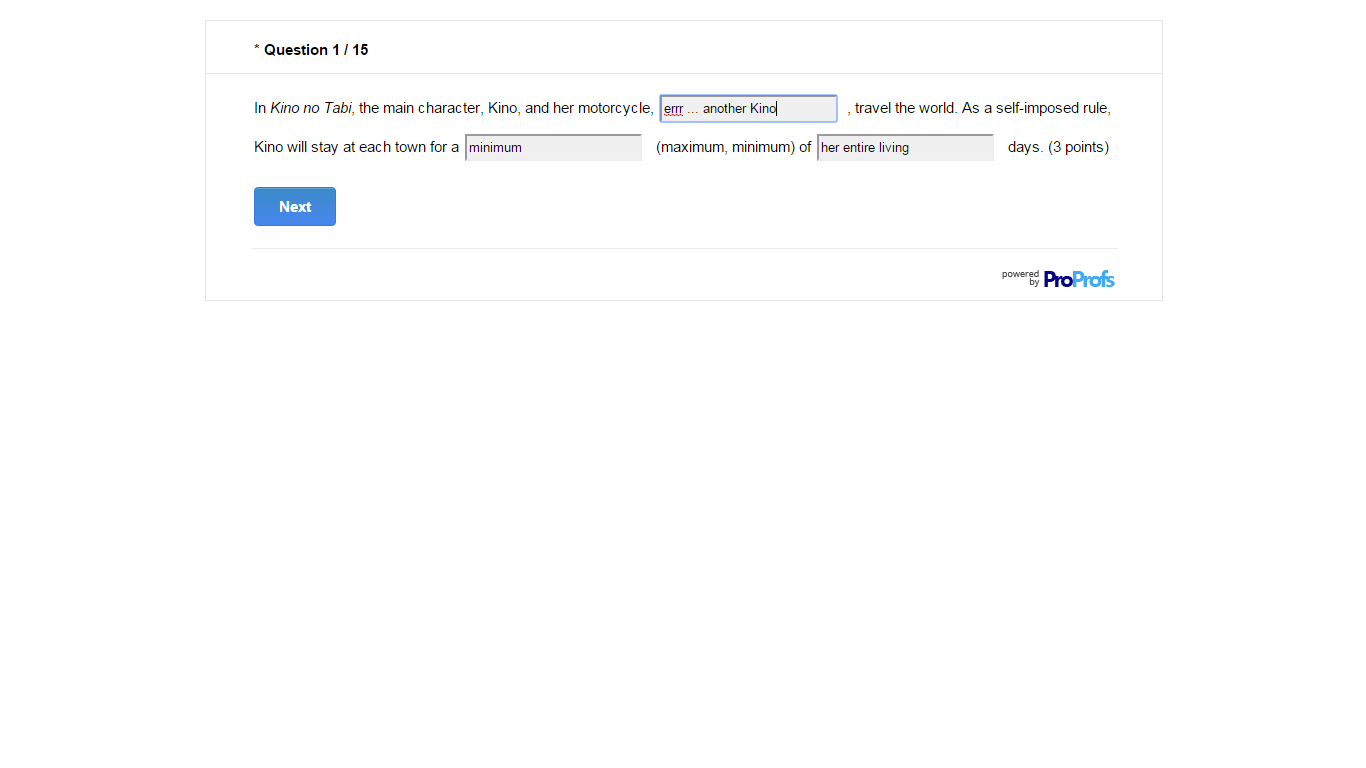 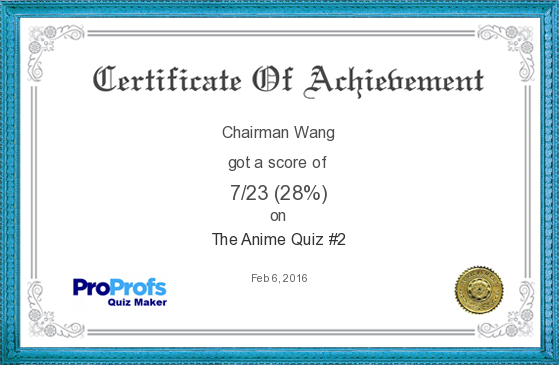 SpoilerShow
I missed 2 points on the Kino no Tabi question because I got confused what the question was asking (didn't realize I was supposed to type maximum)
And I thought that Hatoko's name was Hotoka
Last edited by blaZofgold on Tue Feb 09, 2016 12:03 pm, edited 1 time in total.

Unfortunately, I can't account for spelling errors, as I'd have to manually input every possible mistake I can think of. I do try to accept English names for anime if that helps

If I'm able to find out the title in other languages, I'll try that too.

Or I can make them all multiple choice, but that's boring

I thought the correct answer was obviously a trick... My Japanese is actually better than I thought, the name 近藤 光 I tried hard to find its romaji but failed... actually I knew it right.
Top
Post Reply
244 posts