Ithekro's fleshing out of the 'Nations' in Space Opera has inspired me to make flags/logos for each of the powers...

Kugimiya Knights - based off the Jedi Order logo with a 'key' (Kugi) substituted.

Time Space Administration Bureau - this will probably be controversial.. consulted logo images raizoo provided, but didn't want to remake the complicated shield logo.. so went with the objects that seemed to be repeated across the logos no matter if they were ground forces, air forces etc.. the three pronged star and the laurel wreath.

Geass Regency - fairly simple. logo based on the tracings solwyvern did.

Maidens of Rozen - erm.. the stylized roses in the opening..
Edit: Added alternate that might be easier on the eyes

The First One - a sakura petal.. what else..
Edit: added alternate

Shugo Chara: Ice Planet: Source of the Spice - yes, there are three flags here. This is based off Ithekro's description of this planet being under the thumb of Horo Enterprises who owns the monopoly to the 'spice' there (Dune reference) and the fight between Amu and Horo in Amethyst 7 as a rebellion. The 1st flag will then be the flag prior to the rebellion (before Amu 'realizes' her self) and the 2nd flag is the flag after a successful rebellion. The 3rd is.. well if the rebellion fails... (bad egg >_> )

Kingdom of Night - nothing to say for this one...

ARIA Corporation - used the tail end of a gondola

The Brave Blade Worlds - katana.. not very happy with this one, would welcome suggestions...

Horo Enterprises - took a stylized fox from somewhere and adapted it..

Dragon Dominion - nothing much to say here..

Clannad Republic - guess what those are...

Clannad Republic - redid this one.. tried to bring in a bit of the sense of 'dango daikazoku'.. three dangos linking arms... also descriptive of a "republic"

Kanon Protectorate - used the snowflakes in the Kanon logo as a starting point, then added the hexagons that seem to populate the Toei animation website to hint at the former overlordship of the TOEI Solidarity. Plus putting the snowflake on the darker purple makes it feel more like a 'shield' (thus Protectorate) then a snowflake alone.

The Key Border World of Air - used the silhouette of a bird in flight that is seen on the Air logo.

The Stars of Fortune - just redid the style of the three-tiered star in the Lucky Star logo.

Kugimiya Knight Louise of the Void - used the gandalfr runes...

cause it seems oddly familiar 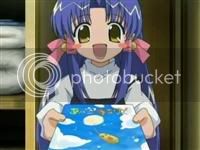 Those are well done melange! I think the Negima Empire would do better with a light blue (kinda like ice) background as it would go better with Eva as she's the only survivor of it.

sovietmisaki wrote:I'm wondering if I somehow influence the creation of this concept by any chance

cause it seems oddly familiar

Which concept are you speaking of? ^^0


chaosprophet wrote:Those are well done melange! I think the Negima Empire would do better with a light blue (kinda like ice) background as it would go better with Eva as she's the only survivor of it.

Thanks!
Well the background color of the flags follow the color codings in Space Opera so I'm sorry but to keep the consistency they won't be changed ^^0

Nebula of the Golden Darkness - just used the wings and heart in the TLR logo...

Herald of the Azumanga - three Azumanga 'Ah' speech bubbles arrayed around each other..

melange wrote:Well the background color of the flags follow the color codings in Space Opera so I'm sorry but to keep the consistency they won't be changed ^^0

I see then. Will The Tenuous Alliance and the Moonlight Quadrant recieve flags too?

chaosprophet wrote:I see then. Will The Tenuous Alliance and the Moonlight Quadrant recieve flags too?

Well I currently don't have any ideas of what to do for the flags of those (and the Clamp Cluster as well) but also I'm not too sure they need it? Also don't know if The Tenuous Alliance should get a flag because well.. it may well disintegrate being tenuous and all.. ^^0

the Clamp Cluster is more a region of space than a political power.

The Tenuous Alliance it more a title than anything else I would think. It is descriptive, but not official a political power (it isn't like NATO or anything yet).

New flag for Aria.. by advise of Juice

HELP! HELP! I need icons for the Factions!!!! Please help!

All hands willing to contribute, please do so! Follow melange's original style!

My work processes are a little bit different from back in 2009, and it is a bit early to be doing colored logos as yet..
1. the logos aren't made in that rectangular format any more
2. while the logo design for new series are done before prelims such that each series represented in prelims has a black and white logo, series logos are NOT assigned any colors until prelims are over and it is confirmed said series made it into regular season and then colors for all series are reevaluated as a whole
3. as such any the colors below for previous regular season represented series are those used for last year
4. i.e. colors below are not guaranteed to be actual colors used this year.

Oh, ok. Can I have the following Space-Opera exclusive logos, then? (For factions/companies)

new version of series icons with new colors for some of them, particularly Hayate no Gotoku and Ore no Imouto

Great! Now if I could juuuust have the icons for the following...

I'll be able to get the Faction page up and running! Also, I have no idea what some of those icons represent.

1. You don't need to wait for all the icons to start on a faction page... just put them in when they are made. the edit button is there for a reason.
2. I will not be around for the next 2 weeks so those studios that don;t already have something made previously I will not have time to work on until later.
3. why would the 'corporate sector' have an icon? there's nothing 'uniting' them like a common studio (like for JCS or Kyoani) or a common seiyuu (Kugyu knights, Order of Lotus) its just a convenient title to refer to disparate entities. Much like the term "The Third World"
4. The filenames of the images are named with their series

Oh, I think Corporate should get an icon this year because there are SERIOUS big players in Corporate right now. You'll see once I'm through with the page. I envision the Corporate Sector to be like an entrepreneur investing firm that starts-up a bunch of independent powers in hopes that some make it to the big stage.