alright, i made another big change on Xebec. The prevous set wasnt really so interesting. Thats because I had an awesome idea.
They're now purely dependant on TOURISM.

changed againShow
"Your level of influence towards civilizations requires half the percentage of tourism to reach the next level."

This shows that this Civ will gain tourism benefits more easily than others. Doesnt mean they can reach Cultural victory easier, but gives them more flexibility when reaching other victories. This means they can gain better science from trade routes (science victory), effective spies (diplomatic victory) and city unrest (conquest victory).

as you can see, all of them are neither closer to victory. its just that Xebec wont get any more by reaching over 200%.
"Your empire begins with a "Familiar" level of influence towards all civilizations."

Xebec now already starts with Familiar with other civs. However, they're still at 0% instead of 30%. meaning that they'll have to build all the way up to Popular/60% in order to get the increase.

this means they already get a science boost at start under trade routes and less penalized when attacking cities.

changed againShow
"Scout that requires no maintenance. Strength doubles (5, 10, 20, 40, 80 and 160) for each level of influence you have towards enemy unit's civilization. (Ancient Age)"

These are generally just normal Scouts that saves gold. Saving gold is great in the start of game, you can build these as much as you like.
Furthermore, they get much better when you accumulate tourism. Also, more easier when using Xebec. Reaching a certain level of influential can make these units so powerful for their little cost. Unfortunately, theyre ineffective against Barbarians... so use these to monitor the land and keeping enemy Civ in check.

Lastly, 160 does look overpowered, but i dont think you'd see that very often.
just one more time. sorry T.TShow
"Scout that requires no maintenance. Strength increases by 50% for each level of influence you have towards enemy unit's civilization. (Ancient Age)"

The scouts are pretty normal now, except when against non-barbarians. which would be 10 strength now. due to +100% cuz of Familiar influence. later in game, can either go up to 12, or 15. almost up to a spearman and pikemen, but faster and cheaper.

"Scout with strength that exponentially grows for each level of influence you have towards enemy unit's civilization. Strength ranges from 5, 10, 20, 40, 80 and 160. Doubled maintenance. (Ancient Age)"

Strength back to level of tourism again. now accumulate lots tourism and keep them till the late age so they can withstand a GIANT DEATH ROBOT! Also great in the start of game, starting with 20 strength! War with Nyaruko early so she can crawl up with love~
EDIT: it now only boosts attack power. having just pure strength is too powerful. >.>;
"Scout with +5 strength and +25 cost for each new Era. Also +25% attacks and doesn't obsolete.
It also captures enemy units from victories into 50 HP (of 100, and waiting for next turn. (Ancient Age) "

now this should be more fun~

*Dormitory* - "Hotel that grants science and more tourism for each City-State friendly to you. +2 science and +2 tourism to your city from each friendly City-State. (Modern Age)"

Hotels are a super late game building that could help you to finish your victories. Only if you have City-States, so its pretty situational. However, a nice counter to other Diplomatic civs.

Overall: Probably a Civ to go Tall with. however, Nyarlatepians could be good for expansions. Its just all up to you. It would pretty be difficult to reach any victory with them actually. Dont worry, just use Nyaruko and crawl up with love~ ;p Woo Nyaa!
Edit: now Nyarukos are available in all ages and designed to pester enemy civs, hoping they'd be annoying to go against.
Admiral Paru ~~ ♪♪ Pixiv ♪♪ DeviantArt ♪♪ Twitter ♪♪

A new saimoé Civ has just arrived! Hailing from the studio, Bones!

Queendom of Bones, led by Victorique de Blois. Her wellsprings of wisdom flows out from the power of National Wonders!
She also can assemble her military with Weapon Meisters from Soul Eater, can effect land and sea units combined!
And Transmutation Gates and Circles from Fullmetal Alchemist. All your future land units can heal together better! 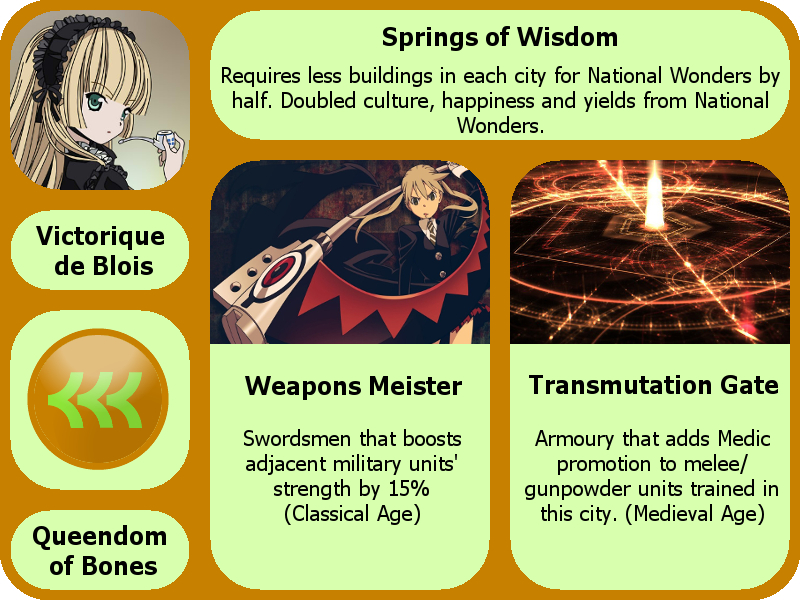 About building requirements, if you have 5 cities, your national wonder only require 3 cities to be built. (rounded up) However, these wonders still need the required building on the city you build your National Wonder on.

EDIT:
fixed up AIC's UA. they can now use Missionaries and Prophets to claim any tile nearby your cities. meaning that they can help you rapidly expand without the use of gold, but the cost of spreading your religion. They can still take foreign tiles, probably costs more moves and can cause diplomatic penalties.

and made a tiny change on Flonyardian Heros. gifting damaged ones will give more than undamaged ones.

Finally, I think now this is possibly the last civ idea I'm gonna make. I could be at my limit now~

Here I present you the Sunrisean Regency! Led by the mysterious C.C.! The immortal witch who can revolutionize the battlefield!
With the powers of the mind and mind altering, Neuro Linkers allows enemy citizens to combat virtually and causing cities unable to operate.
And lastly, from the studio known from their mecha anime, you so cant wait to use them at the end of the game! 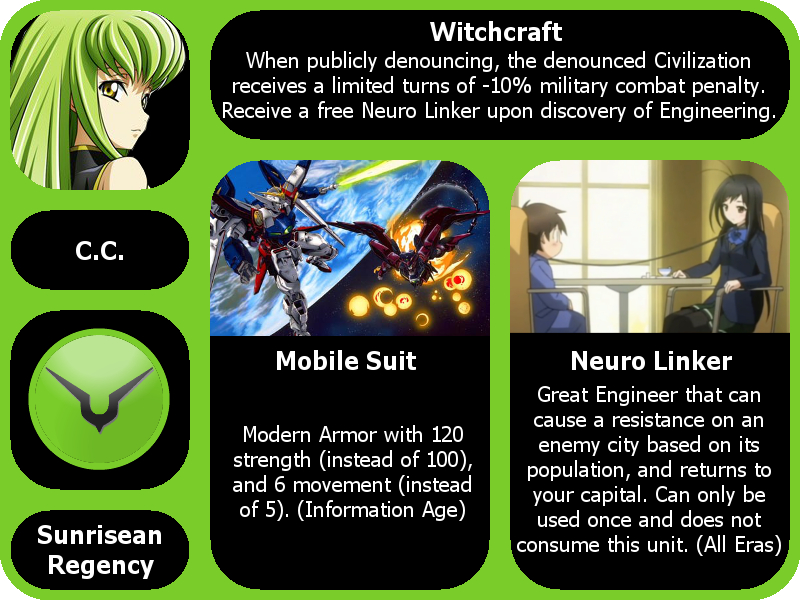 About Witchcraft, this allows you to make denouncing enemy civilization more important then usual. Use this opportunity wisely, or else the enemy can catch you off-guard. Doing this may lower the enemy's firepower for a very long time. (75 turns or more. usually the length of denouncement lasts. Because it doesnt rely on the denouncement's duration because it disappears when war is declared.)

Neuro Linkers (from Accel World) are great engineers, known to be the most desired units. That's why it is better not to hesitate when sending them into the battlefield to disable a city. This is because after using that ability, the unit quickly appears back in the capital, making it easier to hurry production and finish the wonder faster.
Disableing a city should be effective, since it lowers the city's firepower and cripples the enemy's economy. REMEMBER! THE BIGGER THE CITY, THE LONGER THE RESISTANCE!!

Furthermore, you get a free Neuro Linker in the classical age, so its best you prepare for war.

Lastly, Mobile Suit (Gundam) are an endgame units, if you survive that is. Total overhaul. Nyaruko now is a late game unit that can propagate into an army of nyarukos. Hotels now simply gives growth. and your empire pays less gold from building. youre now open to use the extra gold for something. 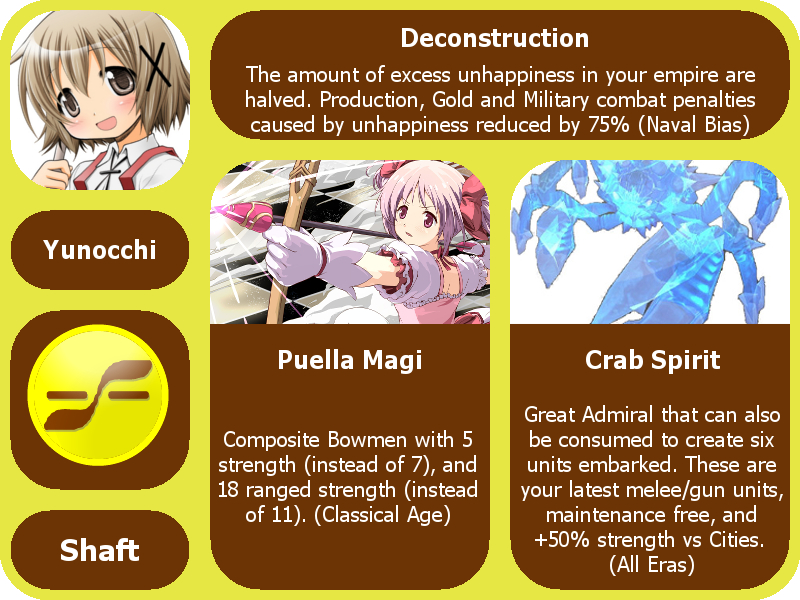 Crab Spirits now allows you to make a small army anywhere it is placed. Great for coastal invasions. 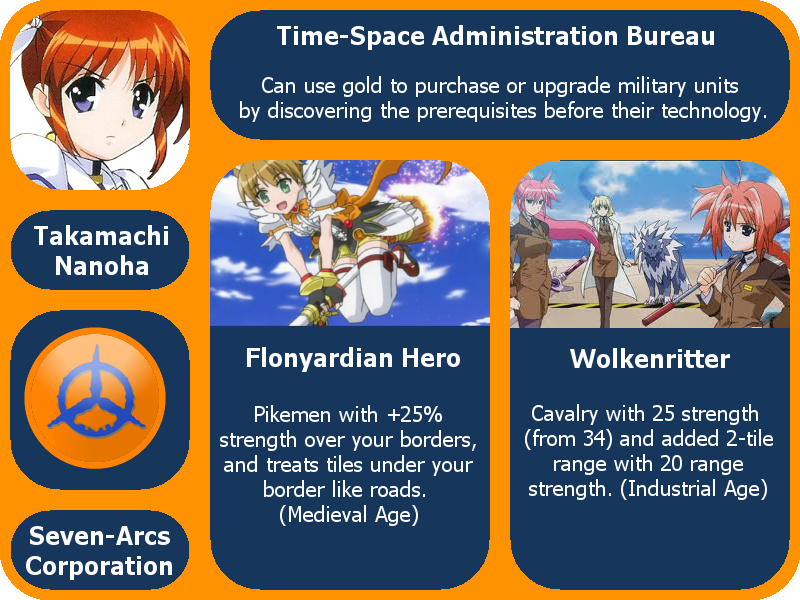 Flonyardian Heros now does not deal with city-states. but theyre still useful when defending your empire.

NEW FIXES: changed the Flower Petal pic for AIC. It now has Kuroneko, which should be a must before theres no reason to call it AIC.

and Sunrise's free Neuro Linker now occurs later in the Industrial Era. Spread out the bonuses, so they'll all equal out before the super late unit, Mobile Suits.

SpoilerShow
finally, a new saimoe civ idea for A-1 pictures' Alpha-One Enterprises. Features Meiko "Menma" Honma from Anohana as the leader. Yuuki Asuna from SAO for Rescue Squadrons, a unique horsemen. and 765-Pro from The Idolmaster as a unique factory. Looks like they'll have to be under war (defending or attacking) in order to make a better use of their ability. Happiness, Taj Mahals, and Artists is the way to go~ Made changes for Alpha-One Enterprises, hopefully look better now. They now can reap the rewards of the ancient age until Sweden or Venice grabs them from you. Rescue Squadrons can secure your upcoming ages. Lastly, finish it off with 765-pros. I guess i'll have to find music for them now. 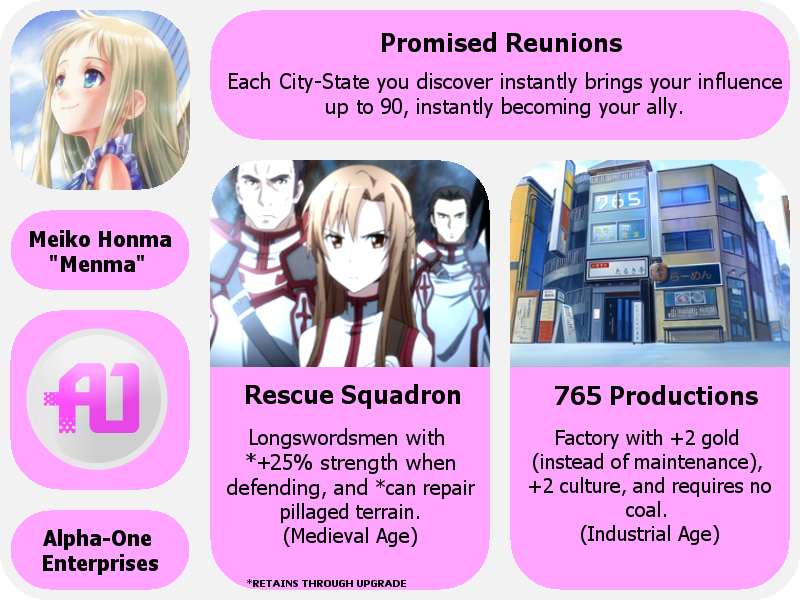 SpoilerShow
since i havent got any civs to be made in-game for Civ5. might as well make ideas for the next game, Civ6.

Each empire in Civ6 has a Civilization ability, Leader Ability, Unique Unit, and Unique Infrastructure.
(Infrastructure can be either a building, district, or improvment.)
*keep on mind that Leaders can have more than one unique unit so theres less limits*
*Also, there can be more than one leader for each empire.*

KyoAni Empire - Stars of Fortune: +5% production towards all units, buildings and districts.

Suzumiya Haruhi
Haruhi's SOS Brigade: additional +5% Non-food yields and +5% growth to cities that are not content (ecstatic cities, happy cities, displeased cities, and cities under unrest). Cities gain extra non-food yields whenever the population grows.
(Excitement to the World: Will grow her cities as much as she can. Dislikes leaders having cities with negative amenities.)

you should make new thread, pyuru

oh... my writer urge... is calling me...
*looks at Space Opera*
*cries of his inability to continue that*

Giving his love for life, and died dreaming about her in the end. A real happy man, right? ~
Top
Post Reply
26 posts