Seitokai activities will be reported here, except for very important or period-specific announcements. Feel free to comment on what the student council has to offer.
Post Reply
10 posts • Page 1 of 1

Proposal: Takei Hisa, Minamoto Chikaru and Sakurano Kurimu will be taking a break from their Seitokai duties. Their positions will be taken over by Kuroyukihime, Shiba Miyuki and Tomori Nao. This is a Judicial Order (JO).
Proposed by: Katsura Hinagiku
Consent: None
Dissent: None
Abstain: Sanzen'in Nagi, Nakamura Yuri, Tokisaki Kurumi, Oreki Hōtarō, Lelouch Lamperouge, Hikigaya Hachiman
Comments

Hinagiku: With that, we have completed all the paperwork and documents needed, and can now make a transition to the newly elected Seitokai.

Kurimu: Alright, it's time for us to kick back and laze around all day ag-

Hinagiku: Kurimu. I'm afraid you can't do that.

Hinagiku: Well, you altered the Seitokai Poll candidate list, which is something I have been trying to contain to the best of my ability. Alas, the fact has somehow been revealed and made known to the public. People are demanding for justice, and I'm afraid we will have to let you face the music.

Kurimu: S-so, what are you going to do?

Hinagiku: It was originally planned that we were going to have to "dismiss" you from your position and leave it at there. That being said, Hisa and Chikaru here also have something to confess....

Hisa: Well, we had been planning to step down from the Magistrate and have new members come in to take up our spots. Seeing how it coincides with your dismissal, we decided that we might as well all step down together and let everyone be happy, you included of course.

Chikaru: We are getting on our years after all, and it's getting tiring with each year of chaos after another. I need some quality time, and Hisa wants to focus on her Mahjong Club more. You also have to admit that you're not getting any more popular, don't you?

Kurimu: I... guess that's true. I'm sorry for causing so much trouble due to my selfishness. I hope you guys will forgive me. Hinagiku: Well, I have long since forgiven you anyway. Dealing with Nagi will be such a drag though...

Hisa: By the way, Hina-chan, who are you replacing us with? I remember that you had handpicked two candidates, so who's the potential third to round it all up?

Tomoyo: They're all right here, in these three files.

*Tomoyo hands over three files to each of the Magistrate members, containing the information of Tomori Nao, Kuroyukihime and Shiba Miyuki*

Chikaru: These are... interesting choices, to say the least. If anything, they'll probably have enough energy to deal with the amount of chaos the Seitokai will be throwing at them. I like these three.

Kurimu: They do look capable, not as capable as me of course but maybe just slightly...

Hisa: I think it's safe to say the three of us agree on the choices of replacement. Well, I guess that's all then, time to say goodbye to this place filled with memories and moments that the three of us have spent much of our saimoe years here.

Chikaru: It has indeed been an enlightening experience for us, but with every start there will come an end, and I think this is it for us.

Kurimu: *sigh* Guess I'll really have to face reality now... Honoka-chan, could you pet me, please?

Honoka: Sure! I'll do it anytime if you come over.

Hinagiku: Before you guys go, let us all take a picture, in remembrance of us being together. 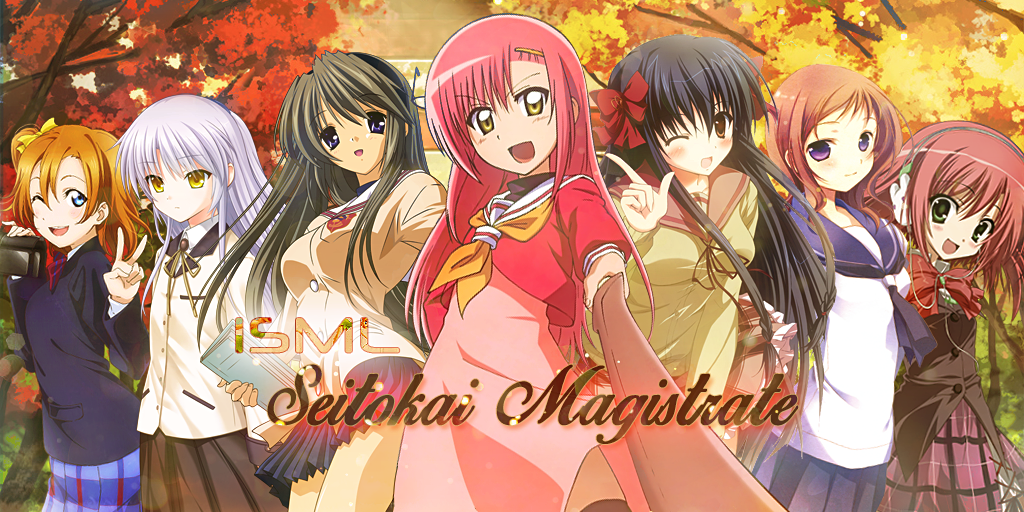 *One week later, after the departure of the three retiring Magistrates*

Nao: This must be the Magistrates' Office.

Miyuki:: I do hope this improves the image that my Onii-Sama has of me.

*The three of them opened the door together, and stepped into the office*

Credits to Crystal for the wonderful group pic of the ISML Seitokai Magistrate!

MIYUKI IS MOE.
YOUR ARGUMENT IS INVALID.

Even Nao and Black Snow can't save it.
Top

MIYUKI IS MOE.
YOUR ARGUMENT IS INVALID.

Onii-sama is in the air
Onii-sama here, onii-sama there...

don't worry, another scam and you'll be frozen

Miyuki and KYH are moe