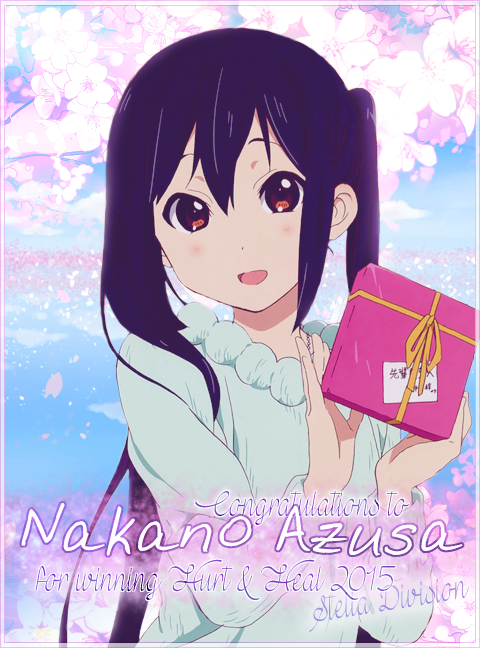 Please do not make off-topic posts. If you have something to say, you have to also vote.
If you have a question or comment about this game, please post here.

LimitsShow
Current Limits
- Maximum actions per vote: 4
- Maximum characters that can be affected in any single turn: 3
- Minimum characters that can be affected in any single turn: 2
You guys dont need a table
EpitaphsShow
2. Nibutani Shinka - She had a strong supporter show up just before her death and prolonged her life until the very end of the game, however, the supporters of her opponent were too strong, and she lost at the final moment. Again. #FOREVERABRIDESMAID. Thanks, Toady
3. Chitanda Eru - Actually having a supporter this time around benefitted her greatly, unfortunately, her support wasn't strong enough in the final stretch, and she was taken out by blazofgold
4. Yuuki Mikan - Not having been a part of any war this time around, she managed to stay invisible for most of the game, ultimately she was killed off by houreki for being TOO invisible
5. Aoyama Nanami - Nanami's supporters seemed to vanish after the war ended as well. They were probably sleeping as she was taken down by Homura
6. Saber - After Shana's death, Saber's main supporters abandoned her, and left her to be taken down by her detractors. She eventually died at the hands of Grish
7. Takanashi Rikka - Following the war, peace mostly ensued, people were plucking everyone down seemingly at random, the first dying to blazofgold
8. Makise Kurisu - After a slew of invalid posts following Shana's death, Kurisu's flame was quickly blown out by Momo to save her from any more pain. The war was over, but what did both sides have left to cheer for? Nothing.
9. Shana - The armies went back and forth for many pages, raising both Kurisu and Shana up and down from death. Ultimately after 30 pages of war, both armies lost their captains one after the other, the first, Shana, died by the hands of hinakatbklyn someone who wasn't trying to kill her but accidentally did.
10. Senjougahara Hitagi - As one of the KuriArmy's close 2nd prospects, she was targeted by the ShanArmy, eventually she fell to WoodyMC, leaving Kurisu with no real backup.
11. Hasegawa Kobato - As the WMW II raged on, she received most of the extra cannon fire, and eventually fell in battle just shy of the top 10, mercy-killed by her supporter, hinakatbkyln
12. Kuroyukihime - With a strong following, she was able to fluctuate health for a long time, but eventually she was brought down and mercy-killed by Desufire, an event that would spark the Second World Moe War (WMW II for short)
13. Yui-nyan - Despite having a few avid supporters, they're desire to keep her alive waned, and smartboyhw came in for the kill
14. Holo - Had a slew of strong supporters, but was whisked away into the darkness by houreki when they were all asleep
15. Konjiki no Yami - After the first World Moe War (WMW I for short), she was found trying to cause trouble and was quickly shut down by Desufire
16. Nagato Yuki - A large scale war ensued for her. The battle went back and forth for many hours, but eventually she fell to CureRainbow
17. Illyasviel von Einzbern - Constantly had her injuries bandaged up, but eventually the attacks were too much for her body, and she died in the arms of Momo
18. Tousaka Rin - The former Hurt Only champion was supported for a while, but her support quickly diminished and she was ousted by instern2
19. Nakamura Yuri - The former Stella champion had her reign cut just short of the halfway mark by
WoodyMC
20. Hirasawa Yui - Despite having an avid supporter, she was cut down to size while they were away, with the final mournful blow going to WoodyMC
21. Momo Belia Deviluke - Was considered irrelevant, and was attacked from all sides, not that she minded it, Magnux7 got the final blow
22. Oshino Shinobu - While watching the ensuing war, she had her blood completely drained by Magnux7 1 point before she should have been
23. Eucliwood Hellscythe - Silently watching the game, she was very slowly dying with a knife stabbed in her shoulder by houreki
24. C.C. - Quickly followed Charlotte in the collective agreement to kill off unsupported people, she silently wept as Momo whispered in her ear, "Nobody loves you"
25. Charlotte Dunois - Was deemed unnecessary and was quickly dispatched by Momo
26. Sengoku Nadeko - Caught in the crossfires as a silent war was brewing, she was bitten to death by WoodyMC
27. Itsuka Kotori - With heavy support from one follower, she managed to survive quite awhile, but eventually, she was expunged from the game by Kurogarasu
28. Aisaka Taiga - Her two large detractors whittled her down very easily, and she was ultimately ended sooner than expected, thanks to mon~chan
29. Nyarlathotep - Largely left alone, until a few people spotted her and chased her down, she had her throat slit by RailWarrior
30. Shiina Mashiro - After a last ditch effort, she was taken down by the head of her impeachment party, Railwarrior
31. Kashiwazaki Sena - She was so hungry, but every time she was about to take a bite, it was snatched away from her. The only thing left for her by the time she was able to eat was meat, and she was forced to eat it by WoodyMC
32. Kousaka Kirino - All her allies from previous battles deserted her, and she was left with no armor for the attack, she was run through by Fuijiwara
33. Yuzuriha Inori - With no resistance whatsoever, she was mauled, beaten, slashed, and even more, eventually put out of her misery by the quick killer, WoodyMC
34. Yuuki Asuna - There was a small push to bump her up a placement, but the onslaught was just too fast, and she met her end to WoodyMC
35. Suzumiya Haruhi - Gunned down by a very determined assailant, with little resistance, she was gunned down by a sudden newcomer, WoodyMC
36. Aragaki Ayase - Was the first target of an unrelenting commander and her main subordinate, with some help from some acquired allied, she was ultimately killed by hinakatbklyn, one of the allies.
___________________________________________________________________________________________________________________________________

Hoping for a quick end.

Oh shit I almost forgot about this

Return to “Hurt and Heal”