I thought we might have discussions about whom we are going to nominate, why, and what kind of chances they might get. Since the number of nomination slots aren't set in stone yet, I'm going to throw out many names whom I believe to be deserving of considerations.

1. Sheeta from Laputa: Castle in the sky

This is the main heroine from one of the best animated work ever, and she deserves nomination just for that, but she offers much more. She is a sweet, cute, hard working girl, who won't flinch at danger, and looks after people around her. One of the prototypical good girl, who also had the looks to charm the boys during 1980s. She deserves a mention.

I present the following evidence. Please try to obtain higher quality video for proper judgment as youtube just does not do EVE justice.

She is the perfect girl of the 1980s, the dream childhood friend, who got everything other than money. Touch was the anime that shed tears unnumbered, and as the main heroine of perhaps 1980s, Minami deserves a mention.

Good girl? check! Beauty with long dark hair? check! Noto Mamiko? check! Yakumo repeatedly got close but failed to make it through the prelim. She deserves another shot.

She is much underestimated girl from a series that had the potential. The series recognition may kill her chance, but she was one of my top girl of 2009. I have attached a picture as the evidence.

In a sense, Sengoku is not a deep character, but I do know she has mesmerized many already, and she can be a cute tease. Since Hitagi will likely be nominated by others, I'm going for a side character.

The current ISML standing does not do her justice as she suffered more for series recognition than the merits of her character.

Believe it or not, she was the one who got most fervent support from Anizone people during Best Moe Tournament, but she just couldn't overcome the lack of series recognition. She deserves much better.

As also does #9's imouto/step-daughter.

She still is my number one choice for a daughter 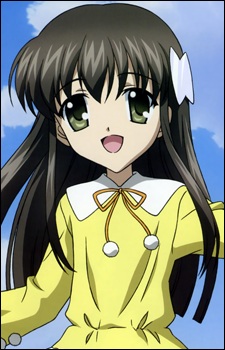 12. Kousaka Tamaki from To Heart 2

She is much underrated and doesn't deserve the reception she got on ISML 2008. Perhaps one of the most awesome characters from Eroge.

Her existence is matter of philosophical debate. I agree with many that anime series strengthened her too much, that I wish there was a way to bring her back.

This is the girl that Otakus in late 1980s and early 1990s were just drooling about. The pictures just doesn't do her justice, so I recommend all of you to look for her pictures.

Long Dark Hair for the Win!!!

Given the right support, this girl won an ISML necklace, fair and square, all legit votes. I am a sucker for girl with long swords and she is no exception.

She is a stretch for me, but I do like her confident yet gentle air.

As I always said, White Rose family for the win.

If you are the #1 girl in Moroboshi Ataru's catelog of thousands of girls, that means a lot.

Couldn't find Japanese original, but Oyuki sounds much better in Japanese
Last edited by maglor on Tue Oct 13, 2009 12:36 am, edited 6 times in total.

Only information we can reveal for sure is that nominations will no longer be weighted 10-8-6-whatever. It should be 1 point for each line.

It also won't be 16 slots neither. I would have to start putting the girls into tiers as more information becomes public.

Fortunately for me many of my very top already have a prelim or even main tournament spot secured.
But from the ones that aren't, I'm sure to nominate:

Now for the rest, while there are many I think are worth to be nominated, I still think it's to early to decide, as we still have a full season with new shows and more episodes from older ones before nominations start, so things can still change a lot on my ranking.

ATHENA TENNOS (U BITCHES BETTER ACCEPT THIS ONE)

The rest is open slots
Top

wontaek, you have some good tastes, such as Yukari, Sheeta, and Koyori.

You just reminded me that I forgot Sakurazaki Setsuna from Negima

Thank you for reminding me of Kotobuki Tsumugi from K-ON

Thanks. I hope they can get in, and seeing you made me remember Siina Hikaru from Figure 17

I know that most of them have no chance, but I'll vote for :

- Tsuruya-san (Haruhi) : My all-time favorite character !
- Asa Shigure (Shuffle!) : She's the cutest of the show and I love her green hair...
- Chihiro Shindou (ef - a tale of memories) : Come on ! It's not because she has an eye patch, that she's not the best character of the show !
- Akiyama Mio (K-ON) : She's so full of moe-factors, that's clear...
- Echo (Pandora Hearts) : Another Rei/Yuki-like girl that I have to like !

maglor wrote:UuuggghhhHHHH !!! My list is getting longer and longer

Everytime I read people posts here it reminds me of more people to nominate, and if I take a full look at all series the list would be giant...

Minori don't need to be nominated. Because she got a record of winning more than half of her matches this year she has secured a spot on next year prelims.


maglor wrote:Why not? I have her in the positive territory. It just that I already have too many to support, that I'm out of the room. Seeing all of your plan made me aim not for going for characters who can get in with my help, but just go with whom I like and hope for best. I don't see why you shouldn't do the same.

For the chracters other than the ones I absolute love I will probably go with the ones that has more chance... cause a chracter you like a bit less may go in because of you vote when one you like only a little bit won't get nowhere even with you vote.

Well if "Osaka" can't draw in the votes...what about someone else from Azumanga Daioh?

"Osaka" = came in last this year. Most famous of the cast. The idiot/alternate thinker.
Sakaki = long black hair. Strong tall silent/cool type. Has a thing for cats mainly and a thing for cute things. She tries to hide both traits from others. Best in sports even though she's not into sport.
"Yomi" = Glasses, tall, "normal" of the group. Straight man to Tomo's antics. Rei Tanaka voiced.
Tomo = spazz/trouble maker. General idiot of the group.
Kagura = sports type
Kaori = heavily into Sakaaki (potental yuri). Too embarrassed to really do anything about it.
Chiyo(-chan) = 10 year old loli smart enough to get into high school. Tries to fit it. Rich but it doesn't show. The cute one.


Azumanga's types, having been set in 2001-2002, have been repeated in other high school slice of life comedies since then, Pani Poni Dash upped the genius loli student to genius loli teacher (Becky). Lucky Star took the type but had the Chiyo looking girl (Yutaka) actually be the correct age for her class, just really short. (also shifted Chiyo's large white dog to Minami...just to change it up).

I think Ayanami Rei from Neon Genesis Evangelion is better than those characters. And Evangelion 1.0 is released in USA, so it can be nominated...
Top

Any anime can be nominated.

I'd like to see Tear Grants and/or Anise Tatlin from Tales of the Abyss, also I somehow have a feeling that they would get crushed.

Here's a name that will probably get crapped on: Haruhi Fujioka.

Hazuki from Tsukuyomi ~Moon Phase~ and Primula from Shuffle!

blakparade wrote:I think Ayanami Rei from Neon Genesis Evangelion is better than those characters. And Evangelion 1.0 is released in USA, so it can be nominated...

Judging from the warm reception the latest Evangelion movie received, it is very likely that Rei will make it to through the prelim and do well in Prelim. Main 50 is a question that might partly be explored in near future.

No, the thing is that I can't choose her, because I don't find her moe... I would maybe vote for her in a popularity contest (though she'd have no chance either)m but not in ISML. It's the same for Osaka : she's in my top 5 favorite female characters, but I didn't vote one time for her in the entire tournament...

And for Minorin, I totally forgot that she was in ISML 2009 :$ I voted for her so many times, that's pretty strange ^^

As you wish. And I also lowered Oyuki by a tier as many suggested.