Well that sucked. What poop results. I will now antivote the crap out of Tenshi to avoid her winning again.

so...looks like a slew of Shana and Mikoto fans went home already. 17260 in 2011, and 14198 in 2012. Fewer votes in the semis than in the quarters as well. I think maglor hit the nail on the head in his post. Looks like Mikoto fans are similar to Shana as well.

Back on track though, congrats to Kanade. That was pretty brutal. That poster is awesome though

And Kuroyukihime's and Tenshi's are magnificent as well. Wonderful job, you guys!<3

The story of Shana's careerShow

Kanade and Rakka <3 Congratulations to my dear angelic ones! :>

WE DID IT, GUYS. WE CLIMBED THAT WHOLE DAMN MOUNTAIN.

I just - I'm so happy omg she finally did it ahahahahaha!!

anD THAT SCORE DIFFERENCE OMG i'm almost crying, that's - that's - kanade. You have two perfect seasons and two necklaces and the circlet and the tiara. More than doubling your opponent's score was not necessary to prove yourself. jgir;aejgir;ae

On other notes: OMG THAT POSTER IS BEAUTIFUL. <3 And it looks like Taiga really will be fulfilling her tradition of a gradually escalating final ranking after all! Yay for Kuroneko getting into third place! (Same as last year, IIRC?)

Wow...what a fun year! Can't wait until the exhibition!

And thus it ends

Not the most exciting final or year, but not surprising in the least, 2012 can be considered good old fashioned Revanchism for the way last year ended.

Now hopefully with that satiated we can get a stronger new character field next year and get back to a more competitive field (though i should doubt such foolish optimism)
ETERNAL LURKER who rarely posts now sometimes posts, maybe
Politics, Religion, and Moé
"I remember when ISML was good"
"ISML has never been good" 
How should we analyze the strength level of 2012 Nova and Stella ?

Stella really derped this year, though I have lots of favorites in Nova too (including Kanade) so it's all fine in the end.

Like Saki, Kanade finally grasps her deserved title. It's not lost again.

Now take a rest and prepare for next battle.
== Low Activity ==
Current Soul: 269
Newest cards of Saimoe set: (Resized for signature use) Would have wished for a hotter image, something like Aquamarine Me Gusta!
Another year, another dollar and a half.
Want to say is a great year, but here and personally it has been.......rough and bleh...
Hope the next year will be better, ISML or personal life

Thanks to Nirvaxstiel and Injection (MAL) for this pro sig.
Top

All the other arenas were so much more exciting (as expected).
And Kugi gets completely shutout!

we are watch history the first undefeated ISML has como her name is Kanade Tachibana, she has dominated every match without problems, this is a begining of an new era in ISML? is Kanade the most dominant girl on competition? only the time said it, but for now, CONGARTZ TO KANADE TACHIBANA THE UNDEFEATED 2012 ISML CHAMPION!! GOD SAVE THE TENSHI!! we see you at 2013 (even no mattering what write the Mayan phofecy)
Top

Grats to Kanade, though it was obvious that this year was Kanade's year to win. After being upset last year, it just wasn't going to happen again, especially with stronger raw power, situational favor (people really believed Kanade deserved the tiara with her perfect record this year), better results both against Eu and other similar-level characters (Eu being around Kuroneko's level due to Eu vs Kuroneko results), and even an advantage in vote split for people who preferred the same type of character since they were both white haired kuuderes (so no KanaHana/Kuudere vs Kugimiya Rie/Tsunderes).

Hopefully now we can have a less obvious tiara winner next year now that Kanade has won hers. Also Kanade will be in Stella, so Nova should be more interesting. I'm still happy Eu reached 2nd place though.
Last edited by Yuki on Tue Oct 30, 2012 5:28 am, edited 2 times in total.

Congrats to Tenshi. So in the end, no-one could get closer to her during postseason than Kobato haha.
I'm definitely looking forward to the other two seasonal tournaments coming up in the bonus exhibition. Should be interesting since I think the top Nova girls for next year will be coming from Summer and Autumn rather than Winter and Spring.
MyAnimeList
VNDB
Top

Congratulations to Kanade for graduating from the Nova division. Welcome to the Stella division.

Folks will probably say that Kuroneko and Yui-nyan got same-seiyuu and same-series boosts from Kanade, but I don't care. Yui-nyan beat Shana.

Nice job on the posters, too (although I probably wouldn't have been able to tell that was Kuroyukihime if her poster wasn't labeled as such...). 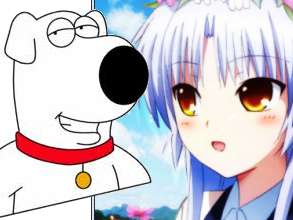 Brian Griffin: That was Faze to Love by Miyuki Hashimoto from her 2006 album "Lovey-Dovey." I'm Brian Griffin and in this midnight edition of the Lunch Hour, back on the menu for the final time this year is the International Saimoe League and the fifth winner of the Heavenly Tiara is Kanade Tachibana, who is with us here on the Lunch Hour. Kanade, welcome to the program.

Kanade: Good afternoon here in Tokyo, Brian. It's a pleasure to be here once again.

Brian: A pleasure to have you, dear leader of the Free Moe World. Well, are you satisfied yet?

Kanade: More than. I never thought I would see the day that I would be named the winner of this Heavenly Tiara, but...it has finally come. I was in tears, hugging Yuzuru when it happened. I can now say that I have accomplished everything I wanted to accomplish in my Saimoe career. And now everything will be a bonus.

Brian: When Eucliwood Hellscythe spoke to you over the phone telling you she conceded, what were your thoughts?

Kanade: At least I didn't die again. *laughter* No, actually she didn't feel bad at all because she didn't expect to get this far and finish runner-up in this thing. We had a chat about the race and about the future and that was that. Eu's a cool person to be with, and it was an honor to have faced him in this final race.

Brian: It's a party down at SSS headquarters, with Yuri Nakamura and Yui also picking up victories. A clean sweep for Angel Beats. What do you think of that?

Kanade: It's a bonus. Yurippe and Yui were in tears when they found out that they also won their final matches. It's been a blessed day for all of us, and I think the voters smiled at the legacy we left, the message we sent. Truly, this will go down as the best day ever in our lives. We will never forget October 30, 2012. No one here will.

Brian: What does your husband Yuzuru Otonashi think of this victory?

Kanade: He was crying too. He whispered to me: "I knew I made the right choice when I wanted you to be my wife." And we shared a long kiss and then I spoke to everyone at the rally. Our two-year old son was sleeping, so he couldn't get to see us celebrating. I think Yuzuki is going to be happy when he finds out his mother is the Leader of the Free saimoe World. Or maybe he won't care because he still thinks of me as Mom.

Brian: The three of you make a wonderful family, for sure. Let's talk a little bit about the Korea tournament. We know that Hitagi Senjougahara is now the Moe President for the Republic of Korea but there has been talk that next year's elections will possibly have an overhaul in terms of the layout. What do you think?

Kanade: I think free and fair elections are a wonderful thing, and for the committee there to change something that isn't broken is a clear sign of disrespect to the process of finding who is most moe. It's a process that is unnecessary, and I hope the committee in Korea will have a change of heart and stay the course. I talked with Hitagi last week about the plans she has for leading that country and they are big plans. She wants to help continue the legacy Homura left this year but accelerated a little bit. I think Hitagi is going to make a great Moe President of Korea and I wish her all the best.

Brian: Kanade Tachibana, the fifth winner of the International Saimoe League, is here with us. Kanade, there is only one tournament remaining and that is the 2channel Anime Saimoe Tournament, where the Saimoe Prime Minister of Japan is going to be elected. And it will go to a representative from the Saki Party. What are your thoughts on the story down there?

Kanade: First off, congratulation to Saki for finally breaking through and make it their year in Japan. However, commiserations must go to the other competitors that were left in the dust. It's not right that the number of voters in that contest has to dwindle due to IP bands. You can never get rid of multiple voting, no matter how hard you try. The world should be allowed to vote in a contest of 2channel's prestige. To limit the votership destroys credibility and really calls into question the leadership of the people at 2channel, who should know better in terms of organizing this tournament. My pick to win this all is Toki Onjouji over Kuro Matsumi. I talked with Toki two hours ago from her hospital bed and I told her to hang in there because she will get through her situation. It's great to see that she is recovering, if slowly.

Brian: Your thoughts on the Diadem winners: Ririchiyo Shirakiin and Kuroyukihime?

Kanade: These are two friends of mine that will get it done next year. If I don't get assigned to the Stella Division next season, I expect to give both of them a stern challenge because I want to take on the best moekkos out there. Hime and Chiyo have a huge upswing and I can't wait to face them, if it is possible.

Brian: Finally, any message you want to give the fans out here in America?

Kanade: Thank you for your support throughout this campaign. I hope to represent everything great about the world and I look forward to taking part in this competition next year. And to the people on the East Coast, please stay safe and dry. My heart goes out to all of you out there. Take care of yourselves. I love you all, from the bottom of my heart.

Brian: Kanade Tachibana, our 2012 International Saimoe League champion. Thank you for stopping by.

Kanade: Any time. I look forward to talking to you again soon.

Brian: Up next, we talk about the storm that has been ravaging the East Coast and left destruction in its wake, Superstorm Sandy. This is the Lunch Hour on 97.1 WQHG, and if you want seconds, don't go anywhere...
Last edited by Hachiko on Tue Oct 30, 2012 5:40 am, edited 1 time in total.