2) Which arena has the lowest total VF?
Arena 7

Much love to Grish and Kiwi for the sigs ♡

2) Which arena has the lowest total VF?
Arena 8
Top

Looking forward to the results, one last Upset of the Round and a big write-up.

Upset of the Round: Iroha over Umaru.
Stay tuned for a Special Report...

Tenshi still the best.
Accelerator won. Good.
6th place for Yuzuru, 7th for Kanie, 7th for Aoyama and 9th for Kosaki. Yeah, it could be better.
Iroha has decent chance at ISML 2016.
Top

Generally good and expected results, except the last group. Overall a not bad ending for 2015 ISML.

I guess this means that Nao will not be the top of Nova next year. 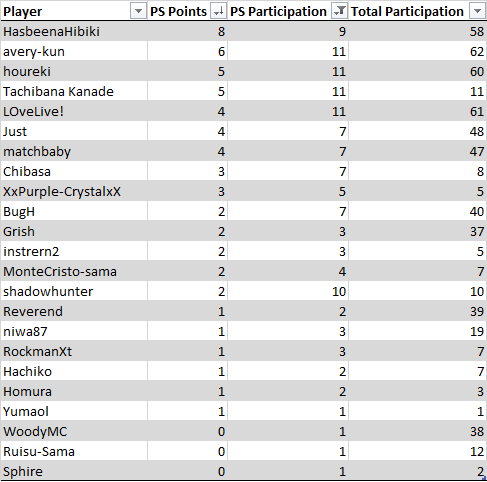 Good job, Nao!
Congratulations to Accelerator! And same to Iroha.

Congratz to Accelerator~
All hail Tomori Nao! Nao for 2016!! By Jo-Ryan Salazar
The Bedlam on Baltic Avenue
December 7, 2015

In a decisive scoreline that surprised no one, and in a turnout that was underwhelming, Kanade Tachibana of the Angel Beats! Party was re-elected Saimoe Leader Of The Free World for a second term after routing Ruri Gokou 6217-4813. Despite losing to Hachiman Hikigaya in his consolation match 5587-5146, Kanade's husband Yuzuru Otonashi had nothing but praise for his wife.

"My wife was a great leader before and she will do it all over again next year," Otonashi said. "She has my full support and the support of the world. Our world, now more than ever, needs united, and today, you saw that the world stands united in electing an angel as the Saimoe Leader Of The Free World. She will not disappoint you. I guarantee it, because I will see to it that happens as her husband."

"I want to thank all the people who missed seeing me compete in this competition," said Tachibana, holding her son Kazero. "I owe it to you all to keep faith alive, keep hope alive, and to never give up when the going gets tough. Love the ones you're with, the ones who love you back. Solidarity is the ultimate strength and the key to overcoming your darkest hours. Don't be afraid of the future. Embrace it and take flight. I love you all and I look forward to leading the new Saimoe Government next year. We'll do our best."

Mikoto Misaka was third place after defeating Eru Chitanda 5906-5364 and in the other Scepter Ranking matches, Archer defeated Sora 5784-4865 and Seiya Kanie rolled past Edward Elric 5516-4863. Accelerator will be the Deputy Saimoe Leader of the Free World after defeated Koyomi Araragi 5643-5433.

"It feels good to be the king of the world and be a great assistant and right hand person to an angel," a victorious Accelerator said, being doted by Last Order, his fiancee (she is not old enough to marry Accelerator yet). "Last Order said that I hold all the cards, and I believed her. Now that I am on top, I hope I won't have to do this stupid tournament anymore and I can try my hand at stopping terrorism around the world.

"Thanks for your support. It's going to be a hella good time bringing hell to those who want to send hell on the innocent! Hell yeah!"

A further Tiara Ranking round was made to classify the best eight not to win the Heavenly Tiara. Kosaki Onodera won one of the rounds with 4346 votes. Yui Yuigahama won 3231 votes, Kurisu Makise won 2354 votes and Saber won 2197 votes. In the other Tiara Ranking round, Chiyo Sakura won 3245 votes to finish first. Asuna Yuuki was second with 3124 votes, Nanami Aoyama was third with 2929 votes and Yoshino held up the rear with 2803 votes.

In the Seasonal Runners-Up Final, Iroha Isshiki recorded the Upset Of The Round, a 5473-2951 win over Umaru Doma. Kougou was third with 2464 votes and Sakurako Kujou held up the rear with 1968 votes. Nao Tomori was the overall Seasonal Champion, earning 5301 votes. Megumi Katou was second with 2813 votes, Isla was third with 1966 votes and Mitsuki Nase was last with 1696 votes. Tomori is projected to be an early favorite to contend for honors in the Nova Division next season.