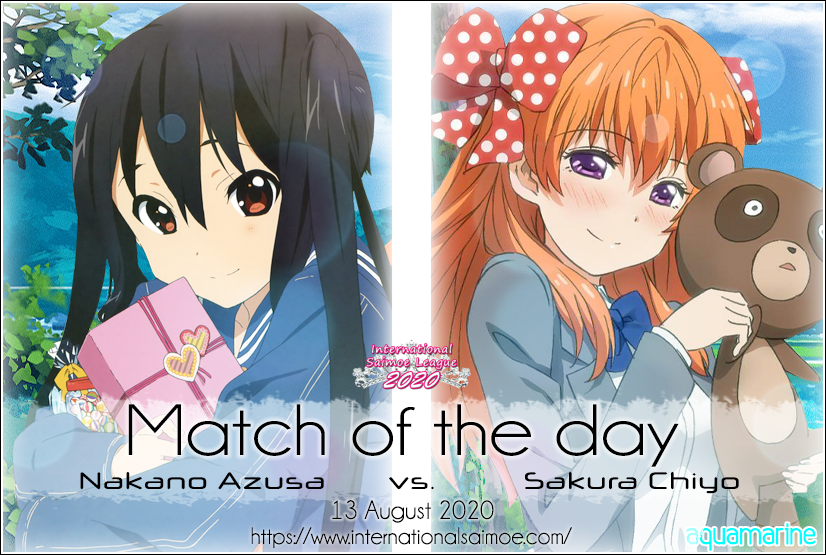 Nakano Azusa (K-ON!) vs
Sakura Chiyo (Gekkan Shōjo Nozaki-kun)
How does it feel to be the sane one in your atypical group of schoolmates? At least, Nakano Azusa may consider that her toughest responsibility. Besides constantly dragging the band back to practice, she has to deal with a loud and mischievous drummer, a sweet and very easygoing keyboardist, and a notoriously lazy guitarist who often takes advantage of the latter to slack off. However, Sakura Chiyo does not have it any easier. When she isn't dragged into manga assisting by the one totally oblivious to her feelings, Chiyo often finds herself either dealing with her troublesome friend's quirky antics or caught in a certain drama club duo’s ruckus, which almost always ends in violence. However, if they were ever offered a chance to trade their group with something else, the answer will obviously be “no”. Before they even realized, Azusa and Chiyo have become a constant part of their group, resulting in exciting and unforgettable days of school life they'd never imagined. Now, as the two voices of reason stand against each other, which one shall soar more loudly and clearly than the other?

Oreki Hōtarō (Hyōka) vs
Hikigaya Hachiman (OreGairu)
If our lovely Saimoe world contained only two famous boys, who would they be? One has outstanding insight and tremendous deductive reasoning. Another is immensely intelligent in liberal arts, but gets lost when it comes to science and mathematics. One is interested in saving energy; he doesn't do anything unnecessary and simplifies his work. Another has a bleak childhood; he usually thinks by himself via brain-teasers and dislikes all tender girls. One has no interests in any school activities, but still joins the Classics Club and helps their members by carefully solving mysteries. Another has isolated himself from other people, not because of his psychological scars, but because of their hypocritical nature. However, he can relieve their sadness when they visit the Service Club. They are Oreki Hōtarō and Hikigaya Hachiman, an environmental protector and a benevolent teacher. Now, will the scepter become more ecological or more honorable?

Archer (Fate Series) vs
Ishigami Senkū (Dr.STONE)
Perhaps a methodical approach is the best way to turn a situation around. Archer believes that the best way to get to the Holy Grail is one where the odds are on his favor. If that means siding with enemy forces because they have a higher collateral than his allies, he will do so in order to achieve his goals. Ishigami Senkū may not have the stamina to survive an apocalyptic world, but he has the intelligence to pull through in any situation. If outsmarting his opponents and creating technology will help him survive this new environment, he will do whatever it takes to restore humanity. Who will be able to outdo their opponent and come away with the victory?

Tomori Nao (Charlotte) vs
Furuhashi Fumino (Bokutachi wa Benkyō ga Dekinai)
When one sees a shooting star, what does one wish for? Fame? Fortune? Happiness? For Tomori Nao, her wish may be to trust others once again. After a terrible incident befell her brother, Nao despised all who were associated with the tragedy. When she joined the student council, she vowed to protect those who, like her, have supernatural powers to prevent situations that occurred with her brother from happening again. For Furuhashi Fumino, it is to become an astronomer. Fumino's strong desire to understand stars stem from her deceased mother. She may not be knowledgeable in science and mathematics, but she will do whatever it takes to make her dream come true, even if it meant relying on a tutor she hides her feelings from. When they see the falling star, will either Nao's or Fumino's wish come true?
Special thanks to WoodyMC, liuxinyu970226, and Momento10 for contributing today's match previews.

Our mission is to discover who is the most moe among anime girls, and it's up to you to decide by casting your vote! If you are new to the site, please join us at the forums for tournament discussion, character campaigning, and more. Join us on Discord, Facebook , Twitter or join our Forum